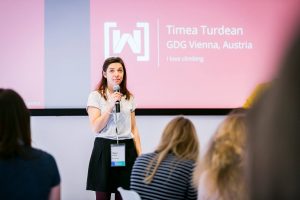 Women Techmakers Vienna is part of an international event series initiated by Google whose goal is to make women in tech more visible and to help build a better understanding community. (read more on www.womentechmakers.com) The consequences of gender discrimination in STEM (science, technology, engineering and mathematics) careers are often overlooked, despite them affecting men and women equally. Gender differences very often lay at the core of gender issues in STEM, and so it is important that these differences are understood and embraced by both genders so that we can achieve equality. Right now gender discrimination is a topic mostly consumed by women and discussed most of the time only between women, thus we would like to shift this conversation so that men are also included. Through this we will be able to create the right environment, programs and policies where women in technology can thrive. Fully committed to the cause and in conjunction with International Women’s Day (8th of March) each year, Women Techmakers event series is back in Vienna to address such topics, and moreover, offer presentations and technical workshops from renowned people in STEM.

The first event Women Techmakers Vienna (www.womentechmakers.at) was successfully held in March 2014. Each year, since then, we have one big conference in March where our growing community is meeting.

The content consist of presentations from role models in STEM and technical workshops. We aim to have a diverse participant profile in terms of gender, age and background knowledge.

WTMVIE would also like to act as an intermediate, presenting actively engaged Viennese communities focused on empowering women in STEM. Their events, workshops or other similar gatherings will be gladly promoted on our channels. The WTMVIE community can make use of it to improve their overall knowledge in one of the STEM fields.

Vision
”Equality & diversity in STEM regardless of gender”

“Raise awareness of gender equality & diversity issues in STEM through the power of example. We create an open environment where challenges can be understood and means to overcome them will be provided.”

More about Women in Technology you can find on makers.com